We are pleased to announce that four Roper Greyell lawyers have been recognized as Thought Leaders in labour law and employment law in the 2022 edition of Who’s Who Legal Thought Leaders: Labour & Employment.

The lawyers named in this year’s Who’s Who Legal are:

About Who’s Who Legal

Who’s Who Legal has identified the top legal practitioners in multiple areas of business law since 1996. Lawyers are selected based upon comprehensive, independent survey work with both general counsel and private practice lawyers worldwide. Only specialists who have met independent international research criteria are listed.

The employer’s vaccination policy was found to be reasonable, except for language contemplating discipline for non-adherence to the policy.  The arbitrator held that the express reference to discipline in the policy was excessive but contemplated that a termination could result at some future time.

The arbitrator’s decision is the first in British Columbia to consider a mandatory COVID-19 vaccination policy that does not provide a testing alternative to vaccination.

Graeme McFarlane, Christopher Munroe, Andrew Nicholl and Gabrielle Berron-Styan from Roper Greyell were counsel for BC Hydro in this matter.

For more information on this decision see: https://ropergreyell.com/covid19-update/mandatory-vaccination-policy-upheld-by-bc-arbitrator/.

We are pleased to announce that nine of the firm’s lawyers have been included in the 2022 Canadian Legal Lexpert Directory.

The Directory can be viewed here: https://lexpert.ca/directory/find-lawyers-or-law-firms/

About the Canadian Legal Lexpert Directory

The full list of ranked firms can be found here and includes insights from lawyers from the top firms (including RG’s own Graeme McFarlane) as they highlight some of the most challenging employment and labour law issues their firms are currently facing. 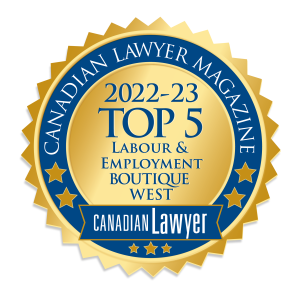 Launched in 1977, Canadian Lawyer provides objective reporting and analysis of the legal landscape from coast to coast, and defines “boutique firms” as collections of lawyers specializing in niche areas of the law as opposed to general practice firms that house a variety of practice areas under one roof.

We are pleased to welcome Sabrina Anis to the firm.

Sabrina practices in all areas of employment and labour law. Prior to joining Roper Greyell, Sabrina maintained a practice in the areas of workplace law and commercial litigation, out of the Vancouver office of a national firm.

The full list of ranked firms and lawyers, with ranking methodology and quotation from Sandra, is here.

We are pleased to welcome Pamela Costanzo to the firm.

Pamela practices in all areas of employment and labour law with a focus on workplace investigations and labour arbitrations. Prior to joining Roper Greyell, Pamela maintained a general workplace law practice at a full-service Vancouver firm.

We are pleased to welcome Norika Takacs-Rehm to the firm.

Norika practices in all areas of employment and labour law with a focus on human rights, workplace investigations and WorkSafeBC claims. Prior to joining Roper Greyell, Norika maintained a general civil litigation practice in the areas of insurance defence, health law and employment law, at a full-service firm in Vancouver.

WWL Thought Leaders: Global Elite brings together the insight, expertise and wisdom of some of the world’s foremost lawyers and experts in a single report, featuring Q&As with dozens of eminent practitioners across multiple practice areas. These individuals obtained the highest number of nominations from peers, corporate counsel and other market sources in our most recent research cycle.

Through interviews with the practitioners themselves, Thought Leaders: Global Elite aims to shine a light on what puts these lawyers and experts at the peak of the profession. They are worthy of special mention owing not only to their vast expertise and experience advising on some of the world’s most significant and cutting-edge legal matters, but also their ability to innovate, inspire, and go above and beyond to deliver for their clients.

Roper Greyell’s long-time research paralegal, Deborah Hall, will be retiring from the firm as of December 31, 2021.

Deborah first came into the realm of what would become Roper Greyell in 1992, as a temporary legal assistant for a lawyer in Tom Roper’s labour and employment group at a national firm. Deborah sat next to Tom’s assistant, and when Tom’s assistant went away, Deborah was called back to cover for them.

In September 1993, Deborah completed her paralegal certificate and training and joined Tom again in the labour group. Deborah learned the ins and outs of labour law working with Tom and via receiving paper copies of leading cases from the Labour Relations Board, which she would summarize and send out to the firm. Deborah found her niche with labour law and thoroughly enjoyed it from the start. The rest is history!

Deborah’s favourite memory from her career have been the learning opportunities throughout the years – she enjoys being able to give quick answers, and has also enjoyed learning about things such as contempt proceedings and strike work. Deborah has also enjoyed watching the career growth of the firm’s lawyers, including those who started at the firm as summer students and returned for articles, eventually becoming associates and partners!

Deborah says that the greatest thing about Roper Greyell, and the thing she will miss the most, are the people, and the time she has been fortunate to spend with them. Deborah is looking forward to dedicating time to her creative endeavours, including creating art, practicing yoga, and walking along the Seawall.

Congratulations on an incredible career, Deborah, and all the very best in your retirement, from all of us at Roper Greyell.